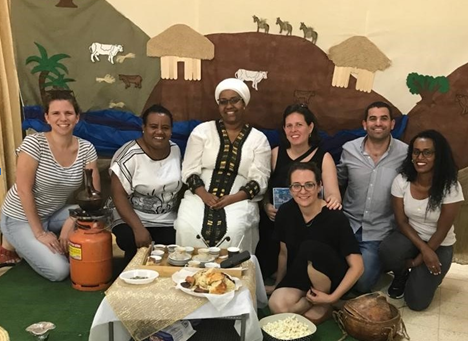 The Ethiopian Jewish community prayed for centuries to return to the Land of Israel. Exactly 35 years ago, on Nov. 21st, 1984 'Operation Moses' began- a clandestine mission to bring more than 8,000 Ethiopian Jews to Israel within seven weeks.  Thousands of Ethiopian Jews embarked on an arduous journey by foot through the deserts of Ethiopia and Sudan. More than 4,000 people died along the way, those who made it to Sudan were airlifted to Israel. The American Jewish communities, including those of Southern New-England, supported and were involved in this operation.

The city of Afula absorbed a major amount of 'Olim' (new immigrants in Israel) from Operation Moses, and the waves of immigration from Ethiopia following. Today, out of 140,000 Ethiopian Jews living in Israel, around 4,500 live in Afula (about 10% of Afula's population). In Kibbutz Bet Alpha (Gilboa region), there is an absorption center, aimed to help the 'Olim' emotionally and physically, to have a soft landing in the state of Israel. In the picture, a visit from the Jewish community of Greater New-Haven in the absorption center, including personal Aliyah stories and a delicious 'BUNA' coffee ceremony.