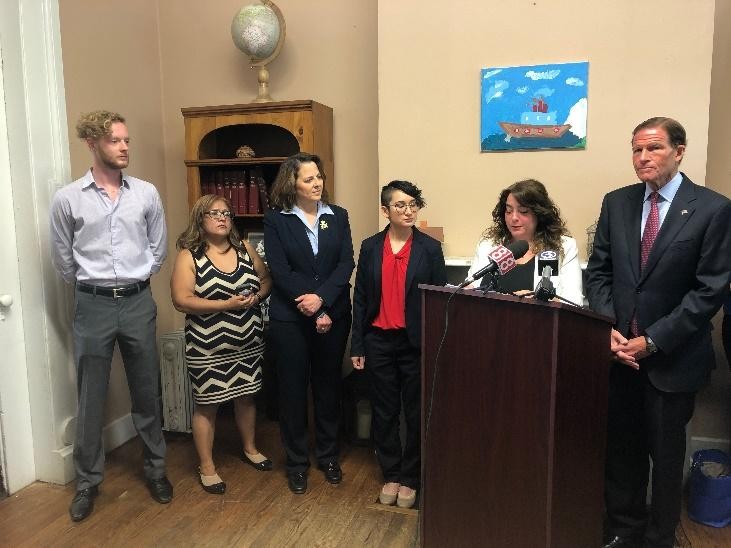 JEWISH FEDERATION OF GREATER NEW HAVEN STANDS WITH SEN. BLUMENTHAL IN CONDEMNING THE POLICY OF SEPARATING CHILDREN FROM THEIR PARENTS AT THE BORDER

Due to the current immigration crisis, the Jewish Federation of Greater New Haven stands with U.S. Sen. Richard Blumenthal in condemning the Trump Administration’s policy of separating children from their migrant families at the United States southern border.

The Federation is joining Sen. Blumenthal and our partners at Junta for Progressive Action and Integrated Refugee and Immigrant Services (IRIS), to urge the U.S. Justice Department and the Trump Administration to stop this policy immediately and reunite children and parents who have been separated.

The Jewish Federation of Greater New Haven’s CEO Judith Alperin expressed deep concern for the situation stating, “This cruel and inhumane practice may inflict irreparable harm on innocent children. Not only is this practice contrary to American values, it offends core teachings in the Jewish tradition of welcoming the stranger and caring for the most vulnerable.”  “The Jewish community recalls the time not long ago when we were the stranger finding refuge on American’s soil after enduring unimaginable hardship and persecution.  We pray that our country will find its moral compass again soon.” said Alperin.

The Trump Administration stated it had separated 1,995 children from parents facing criminal prosecution for unlawfully crossing the border.  Attorney General Jeff Sessions announced the “zero tolerance” policy officially in early May to stanch the flow of migrants, mainly from Central American countries like Guatemala. It calls for prosecuting nearly all of those who are found to have entered the United States illegally. Previously, most border-crossers who were caught would have faced deportation but not criminal charges, and would not have been separated from their children. Children whose parents have been arrested are transferred to the custody of the Health and Human Services Department, whose staff screens them, finds housing and remains responsible for them.

In May, the Anti-Defamation League released a statement urging the Departments of Justice and Homeland Security to reconsider and withdraw plans to separate migrant families seeking asylum at the border. ADL submitted a formal letter to Attorney General Sessions and Secretary of Homeland Security Kirstjen Nielsen outlining objections to the policy and is currently circulating a petition advocating for its withdrawal.