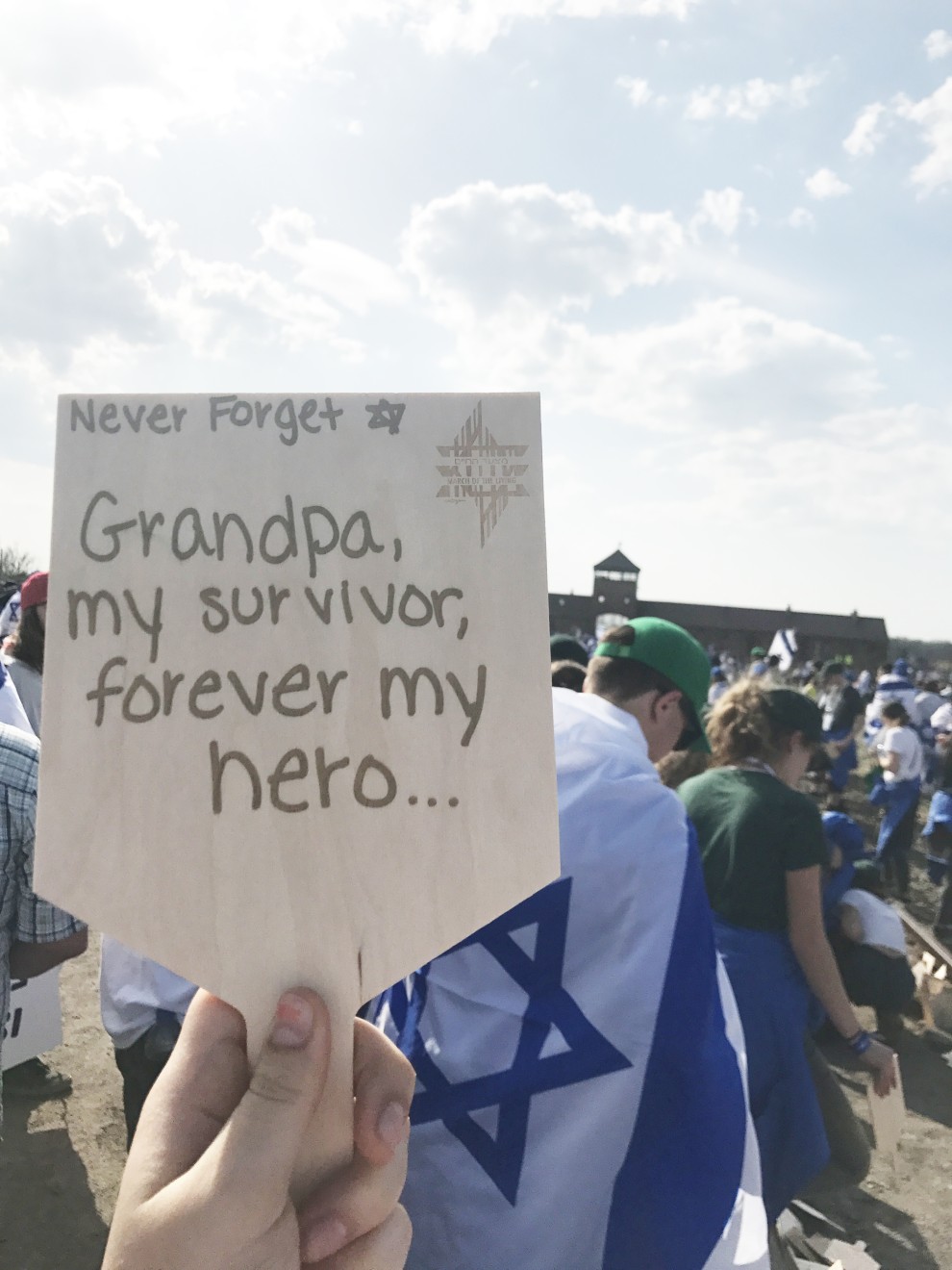 In April, members of our local Jewish Teen Education (JTE) group participated in the March of the Living, where they journeyed to Poland to explore the remnants of the Holocaust, visit concentration camp sites and then traveled to Israel for Israeli Independence Day. Here, two students discuss what they learned and how this trip changed them.

Q: What was one new thing you learned in Poland about Jewish life before, during, or after the Holocaust?
A: Hannah Sosensky: In Poland, there are not many Jewish people left. The Holocaust exterminated a substantial portion of the Jewish population in the whole country.

Q: Describe one location or event in Poland that had the greatest impact for you personally.
A: Hannah Sosensky: Walking the grounds of Majdanek. One specific area of the death camp that stuck out to me was the horribly immense pile of human ashes under the dome. My eyes widened and my jaw dropped. Feelings of hopelessness, pain, and wasted lives immediately came over me.
A: Julie Fleischman: Tykocin was silent. We got off the bus in an unsuspecting location and started walking through the woods, and then we reached this clearing with three enclosed areas. It didn’t seem possible that a place with so much death and devastation could be so far and so alone from the rest of the world. It originally felt like all the life was gone from the area, but then I looked at the memorial stones, the yahrzeit candles, and the Israeli flags, and I realized that it was also a testament to life and all the people who know and care about what happened. It was suffocatingly silent and empty of life, but also people had come to fill the gap. I saw a butterfly fly across one of the areas, and I knew it was common, but it made me think of the poem, “The Last Butterfly,” and that butterflies felt free to come here again. There was life despite all of the atrocities.

Q: What was one new thing you learned in Israel about Jewish life before, during, or after the Holocaust?
A: Hannah Sosensky: I learned how connected everybody is. On Shabbat at the Western Wall, people from Israel and all over the world come together to pray, sing and dance. Everybody was so welcoming and happy to have Jewish youths surrounding them who were eager to learn more about their Jewish faith and culture.
A: Julie Fleischman: I got to experience the incredible nationalism in Israel. Nothing compared to that feeling of getting off the plane in Israel after being in Poland and feeling that absolute sense of safety and being home.

Q: Describe one activity, place, sight or sound that will always stay with you from the trip, either in Poland or Israel.
A: Hannah Sosensky: At the end of a long day, about five or six times during the two weeks, all 70 of us would sit in a circle and reflect on the past day as a group. I felt a true connection with everyone from the trip and I enjoyed having a platform and new people to talk to.
A: Julie Fleischman: When we were at the Kotel, on our last Friday night, it was Kabbalat Shabbat. The wall was full of people, from all different lives and places, but none of that mattered. The moment that will stay with me forever was when a group invited some of the girls in our group to join them in singing “Sim Shalom.” We didn’t know any of them, and that really was what made it so unforgettable. In moments, I was holding hands with an old woman from Korea on my left and a young girl from Texas on my right, and somehow, we were all singing the same songs. It didn’t matter that we’d never seen each other before; we’d all been drawn to this center of the world and were connected in a way that required no words.

Q: How did this trip change your own personal Jewish identity?
A: Hannah Sosensky: I now feel a true link to my homeland and Jewish people. Remembering the horrific past and celebrating the future has given me new meaning of what it means to be Jewish.
A: Julie Fleischman: It made me realize that I am not just a part of a Jewish community here in Woodbridge; I’m also connected to a global Jewish community. On Yom Ha’atzmaut, we went to a March of the Living celebration at night and there were people from all over the world, representing the Jewish community. It felt empowering to realize that we are all different, yet we are also all connected through our Judaism.