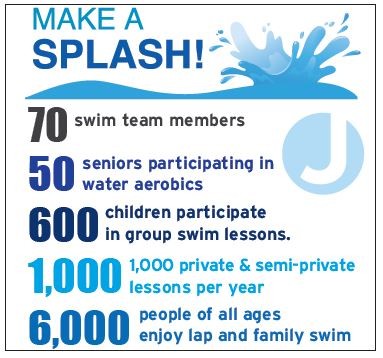 “The Marcia and Stanley F. Reiter Swimming Pool at the JCC of Greater New Haven is a special place for so many people in our community,” said Scott Cohen, Executive Director at the JCC of Greater New Haven. In a typical year, the pool serves thousands of people of all ages. Programs range from Swim with Me and swim lessons for all ages to competitive swim team, adaptive swim for people with disabilities, water aerobics, lane walking, free swim and family swim. “Swimming is a life-saving skill and a healthy way to keep your joints moving year-round,” said Nicolle Camara, Director of Sports & Recreation at the JCC. In fact, Jewish law counts swimming as one of three skills parents must teach their children as a proxy to risk-taking, judgment, physical health, and personal safety.

For the Greater New Haven community— especially during the COVID-19 pandemic— the pool at the JCC has served as an oasis of safe space for exercise and stress alleviation. Dozens of thank you notes and emails were sent by members during this special time, many of whom recognized the value of the pool and what it meant for those who’ve used it. Since the pool was named for Marcia and Stanley F. Reiter in recognition of their ge

nerous gift to build it, many have stepped up to help sustain capital expenses and ongoing programs at the pool because they found it to be such a meaningful place. Most recently in 2019, the pool received a gift from the Atkins family to purchase a special wheelchair to enter the water via the ADA-accessible pool ramp, making the pool more accessible to people with physical disabilities. This winter, the JCC celebrated two new lane sponsors to support the capital needs.

SWIMMING IN THE FAST LANE

The Federation’s Chief Development Officer, Amy Holtz, shares that her phone rings often with calls from generous and devoted community members looking for meaningful ways to direct their philanthropic dollars in the Jewish community. The last week in December was particularly special, as Holtz received two calls from two different donors who wanted to sponsor a swim lane at our pool. These donations help to support capital needs and improvements which do not come from operational revenue such as membership dues and program fees. "It was a wonderful and welcome surprise to have two generous donors interested in making a gift to our pool at the same,” said Holtz.

Barbara and John Lichtman dedicated a pool lane stating, “We are and always have been very committe

d to the JCC. We love that our grandchildren have been able to enjoy the center from the Beverly Levy Early Learning Center to learning to swim at the pool.” John added, “Barbara is a dedicated user of the JCC fitness programs and for the last year, she has enjoyed the virtual fitness classes that the center has offered. We are happy to support the programs and services of the JCC and look forward to doing so for many years to come.”

Dr. Kalman Watsky and Dr. Debbie Fried provided that, “for thousands of years, humans have had to find the resilience to survive torture and slavery, plagues and pandemics. As Jews, we've had a lot of practice. We do so via coming together as a community, by nurturing our sturdiness via many ways, including physical mobility and comforts, as well as a wide variety of other coping mechanisms. Our own JCC offers us such a compilation of supports in our current time of stress. It is here that we can come together, some for pickleball, some for spinning, some for swimming, some for schmoozing- en mask! We aim to support the JCC community in this way, hoping to pass on to future others who can find what enables their own resilience when the need arises. Thank you to all who make this community possible.”

MAKE A “SPLASH!” AT THE JCC

As a result of the renewed, strong interest in supporting the pool and our Aquatics program, the JCC has launched a new opportunity for donors and we are excited to announce the launch of our Make a Splash! campaign which includes a donor wall with plaques at the pool.

Our first plaque was dedicated in honor of Pat Sundermann, who has volunteered with the JCC swim team Blue Marlins every single day in the past 25 years. Pat, whose mother was a competitive swimmer and champion in breaststroke, used to swim on the YMCA swim team with her sister as a child. No one was surprised when Pat’s own daughter Emma presented a talent and a love for swimming and joined the swim team at the JCC, which is when Pat became a volunteer with us. “You’ll work with the parents and I’ll work with the kids,” she recalls the head coach told her with a determined tone of voice. Since then she has been the glue keeping the team together, especially after her daughter Emma died in 2003 from a rare infection. “Emma loved swimming, she loved the water. What keeps me going is seeing the kids improve on their strokes, turns, and dives. You just see it in their faces, that they are so proud of their accomplishments. And I love being a part of it,” said Pat.

Our second plaque came from Holly and Michael. In Spring 2020, Holly learned she was pregnant and was thrilled to hear that the JCC would be safely reopening the pool during COVID. Holly always loved swimming but she particularly enjoyed it when she could feel her baby girl, Lucy Noelle, doing kick-turns in utero while Holly swam laps. Holly cherished those moments of special connection with Lucy and she will never forget them. After Lucy was stillborn, Holly and her husband Michael decided to make a gift in her memory, in support of the Aquatics programs at the JCC. “Everyone, especially at the JCC, has been so wonderful. People have been checking in with us…of course, it is the most awful thing that can happen to anybody but it is comforting to know that there are so many people who care. Especially during the pandemic, and with the fact that both of our families are living a plane ride away,” said Holly.

Michael and Holly named their baby Lucy Noelle because Lucy was a name they always loved and Noelle was Holly’s first relative who immigrated to the United States. With an optimistic gaze into the future, Holly says, “not all hope is lost. Our future kids will get swim lessons here, and we will show them Lucy’s plaque on the wall. Our hope is that this place will carry on Lucy’s legacy and will help bring our family, and other families, together.”

For information on all the ways that you can support the JCC or the greater mission of the Jewish Federation of Greater New Haven, contact Jewish Federation Chief Development Officer Amy Holtz at aholtz@jewishnewhaven.org.