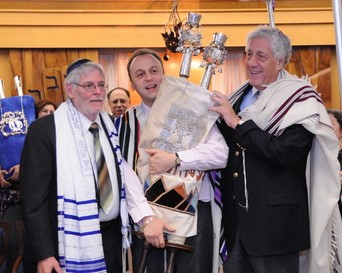 Founded in 1962 by a group of local Reform Jews seeking a different type of synagogue experience, Temple Emanuel was initially located in the home of founding members Lois and Paul Levine. Today, as the congregation gets set to celebrate its 60th anniversary, the synagogue is nestled in the woods off of Derby Road—a place it has called home since the 1971.
Rabbi Michael Farbman understood the uniqueness of the Temple Emanuel experience even before he was appointed the congregation’s spiritual leader in 2009.
“While I was interviewing, everyone I met would tell me how they ended up at Emanuel. Some came looking for a shul, others weren’t sure about where to go and were invited in by a member. Some people came by accident. But no matter what the person’s journey, they all said, ‘we walked in and instantly felt at home,’” Farbman says. “It’s just an amazing community, an incredible environment.”
That sentiment is shared by congregants. Phillip Pivawer moved with his wife, Barbara, to Hamden in early 1964. Looking for a congregation to join, they attended services at a few area synagogues until they found good fit inTemple Emanuel.
“We came from a small town in Indiana, with a very small, friendly congregation, and were looking for something similar,” Pivawer says. “In the summer of 1966, Barbara saw an article about the Reform Jewish Association and their first student rabbi. Lois [Levine] came to our house and invited us to high holiday services. We went, and we never left.”
“It’s such a friendly place. We’re open to all kinds of people from all kinds of situations. If you want to be there, we want you there,” he adds.
Robin Levine-Ritterman, a past president of the synagogue who joined the congregation with her wife and daughter in 2000, believes the community is what has kept Emanuel alive and well all these years.
“There is a real warmth, caring and support among community members,” she says. “You can’t show up for a service as a new or prospective member without having several people come over to find out who you are and how you found us.”
The communal spirit that Emanuel is known for is not accidental. “Temple Emanuel was created by a group of pioneers who were driven by the idea of a community they wanted to build,” Farbman says. “They wanted to be profoundly different. When the synagogue was first established, they called themselves ‘temple emanuel,’ with lowercase letters. They wanted to deliver home the message that this was not an institution, it was a community. We now spell it with capital letters, but that spirit of communal revolution and experimentation, that’s still there.”
The world is a much different place than it was in 1962 when Temple Emanuel hosted those first meetings. But the sentiment of what it means to belong to the congregation, the community, hasn’t wavered.
“The spirit of Temple Emanuel was instilled by the founding generations,” says Farbman. “We are all hungry for meaning, for engagement, for community. Even if we are overwhelmed by so many things and so many tasks at hand, communities are profoundly important, and Emanuel had a particular vision of what a community could be.”