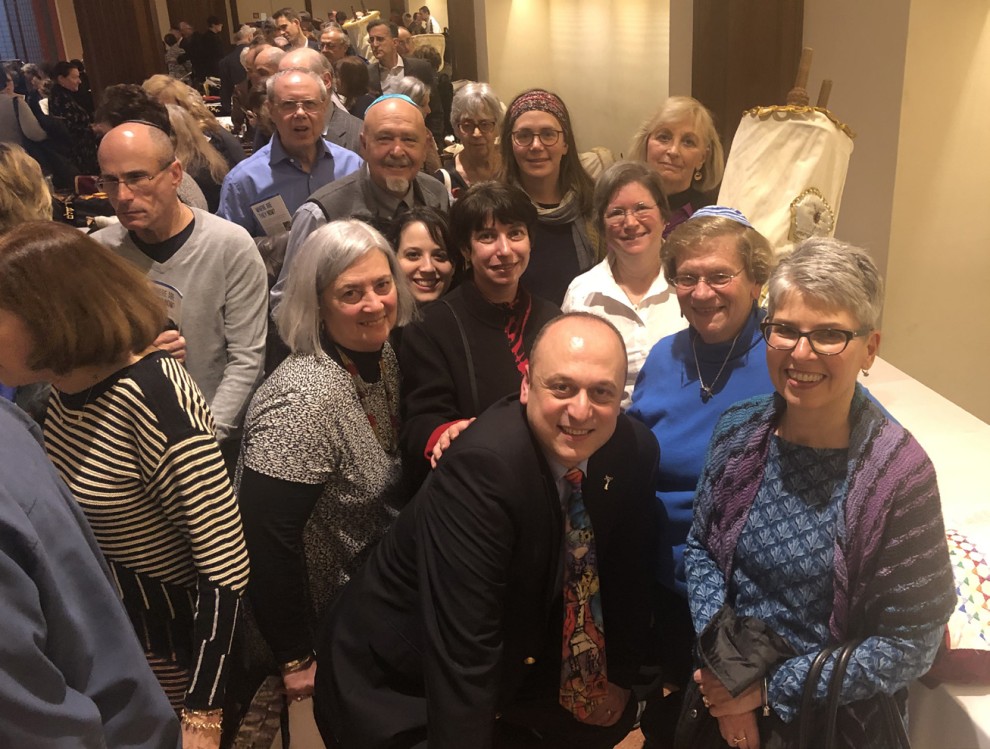 On February 5, Rabbi Michael Farbman and congregants from Temple Emanuel of Greater New Haven attended a once-in-a-lifetime event celebrating their Holocaust Torah, with other guardians of Czech scrolls at Temple Emmanu-El in New York City.

The event was sponsored by the Memorial Scrolls Trust and was the first ever gathering of its type, only for those with Czech Survivor Scrolls. Congregants participated in a procession of the scrolls, a discussion of the exhibition and a visit to the museum.

BACKGROUND: During the Shoah, the Nazis looted art treasures from wherever their armies marched. They envisioned a permanent exhibition of Jewish relics that would outlive an extinct Jewish race; and to that end, they gathered the gold and silver artifacts and ritual objects, as well as precious manuscripts and books from decimated temples. Among those vast treasures, were a great number of sacred Torah scrolls. The Nazis used Jewish prisoners to catalog them in a meticulously numbered and labeled system. When the war came to an end, they were beautifully displayed in a state museum in Prague. But even with that, it did not guarantee that the Torah scrolls would survive over any great length of time.

In order for them to do that, they would need to be unrolled from periodically to keep the parchment from perishing. The post-war surviving Jewish community was a mere fraction of its previous existence and they lacked the resources to maintain the collection properly. It seemed then, that the Torah scrolls were condemned to a slow, but continual, deterioration.

That was until 1963, when a group of prominent London art dealers and philanthropists gained the confidence of the Czech government. London’s Westminster Synagogue offered to house a portion of the scrolls in a Holocaust Memorial Museum and distribute the remaining ones within Jewish communities Requests for Torahs soon reached Westminster from all parts of the world and began to be distributed bearing a brass identification plaque, and accompanied by a certificate of origin. One of the scrolls was presented to the White House. To learn more, visit the Memorial Scrolls Trust at memorialscrollstrust.org.

Torah scrolls are very special. It is an incredible honor and privilege to read from the Torah scroll in front of the congregation. It requires skill and effort, and lots of preparation for each such occasion – a labor of love on behalf of the community and of the Jewish people. Holding the Torah scroll does not require a special skill (perhaps some strength is useful), but it can be a truly moving, emotional experience. When holding the Torah, whether for the first time as a bar or bat mitzvah, or for the 100th time, we cannot help but be in awe of the incredible chain of tradition, of hundreds upon hundreds of generations of Jews that cherished their Torah, and passed it on, leaving a small mark that perhaps cannot be seen, but can be felt by us as we accept the Torah from their hands and carry it forward. The sense of continuity, of importance of ritual and of connection with our people’s past is palpable whenever one holds the Torah — a truly awe-inspiring feeling.

As I held TE’s Holocaust Memorial Scroll #1178, and as I marched in a quiet procession of over 70 Czech memorial scrolls, I was overwhelmed for a moment by a different kind of emotion. In my arms, I held not only an incredible treasure of the Jewish people that was created and lovingly maintained by previous generations of Jews I did not know, but a scroll that belonged to the destroyed Jewish community of Horazdovice, a community that perished in the flames of the Holocaust. This was not just the Torah connecting me to the Jewish past – this was a moment to acknowledge, once again, that the future of this Torah’s Jewish community of Horazdovice was wiped out by the cruelty of hate and yet somehow, miraculously, the orphaned Torah has survived and found its way into the loving hands of our community, right here in Orange, CT. Scroll after scroll paraded through the room packed with over 800 people from some 80+ synagogues in the tri-state area, honoring the painful past – and celebrating the miraculous survival of Judaism. I will never forget this moment and this feeling.

I have invited other members of TE who were able to attend to share some of their experiences from that day. I hope that their words can help you experience some of that special occasion:

“Tuesday, February 5, was truly a spiritually and personally meaningful experience for me. Watching the processional of more than 70 Czechoslovakian Holocaust scrolls, with our rabbi carrying our 1850 scroll, was a moving sight. To be there with a group of folks from my TE family made everything even more special and exciting, starting with the difficulty of parking at the train station to our rolling, sometimes party-like conversations on the train back and forth, and our long walks from Grand Central Station to Temple Emanu-El and back. It is such a privilege for our congregation to have been entrusted with one of these rescued, restored scrolls. In addition, it now appears that the scroll we retired in 2007 (to be only displayed) may indeed be able to be restored and put back into use. As one of those lucky enough to have chanted from that scroll during the retirement service, I would feel even more fortunate to once again chant from it in the near future. Any such opportunity would enhance my feeling of connection to those who perished for their beliefs and heritage, and for whom I may speak when chanting.” — Barbara Berkowitz

“Having convinced myself that one of the Czech scrolls must surely have come from the shul of my grandmother Adele Kolish Reyman, I felt that I needed to be at this rare reunion of the Czech scrolls residing in the tri-state area. Reading and hearing about these scrolls, gently touching the covers, viewing the IDs affixed to the wood, and seeing the solemn walk with the Torahs were profoundly moving experiences.

Who can say that Adele, her four older brothers and their parents did not see one of these very scrolls I was seeing? No one can say it is not there, so it is. I needed to be there.” — Barbara Miller

These are some of the emotions that the ten Temple Emanuel members felt as they saw the parade of more than 70 Czech Holocaust scrolls from all over the United States come down the aisle at Temple Emanu-El in New York City on February 5. This was the largest gathering of the Czech scrolls ever in one place. The Memorial Scroll Trust has 1,564 scrolls on permanent loan to congregations throughout the world. Temple Emanuel’s scroll from Horazdovice came to the Temple Emanuel congregation in 1966 under the leadership of then-Presidents Lois and Paul Levine. It has been used in countless Friday night services, b’nai mitzvah services and High Holy Day services over the last 50 years.

During World War II, the Jews of Bohemia and Moravia were wiped out. The people had been lost, but amazingly 1,564 Torah Scrolls from more than 122 congregations had been saved. Westminster Synagogue became the home to these Czech Scrolls in February of 1964. There they were stored, restored and then sent back out into the world by the Memorial Trust Fund. The evening of February 5 brought 70 of these scrolls and their congregants together for the first time.” — Melissa Perkal