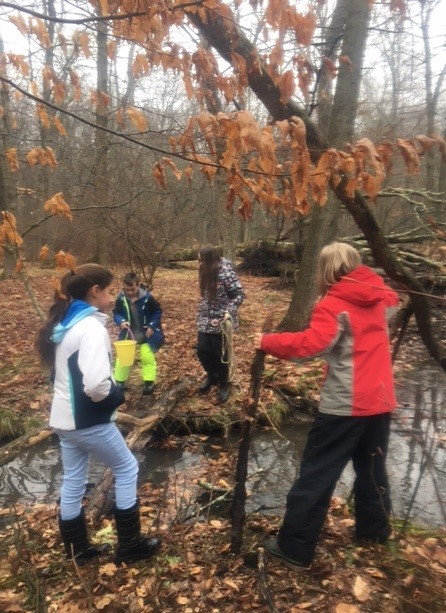 This is the first year of a new program called “Teva Tuesday” in our multi-age fourth and fifth grade classroom at Ezra Academy. The program integrates secular studies, Judaic studies, science, holidays, writing and social/emotional development, as well as cultivates a community of excited, motivated and hands-on learners.

We begin each outdoor time with a niggun and blessing. We kicked off the year by allowing the students to become comfortable in the woods – realizing that quite literally, some students had never walked on an unmarked path. We then tied the outside time into the month of Elul and new beginnings. “At first I was nervous about Teva Tuesday because of bees and cold weather. Now I like it a lot because I like being in the rain and stomping in the water. I like trying to build things like our shaduf, even though it didn’t exactly work,” said student Dani Brandt.

We have used our outdoor time to connect with our curriculum. For example, we had been doing a unit about archaeology and how we learn about the past. The students started their discovery with a puzzle activity. Each group received only a few pieces of the whole puzzle. They then realized how hard it was to figure out the full picture with only a few pieces. The activity helped the students understand what an archaeologist must go through to find out about the past. For Teva Tuesday, the students ventured outside and worked on their second activity. They used cardboard tubes to look through and then named the tubes “monotubes.” After looking through the monotube, students wrote descriptions and created questions about what they saw for their group members. At the start, the task was difficult for them because they could only see a small section of a very large picture. But students were then able to relate it back to the archaeology lesson and the pieces of a puzzle and construct a more complete image.

Along with the science teacher, we reworked the science curriculum using National Standards and Common Core. By doing this over the summer, we were able to find areas in which to use the Teva Tuesday component and link it to the identified units of study in science. One example is the topic of erosion. While in the science lab, we used water tables and conducted experiments by changing only one variable in order to measure how water impacted the sand. Then we moved outdoors to complete activities using wind and water. Additionally, we did water testing of the stream found in our outdoor space and then created water filters.

I know that our new Teva Tuesday program is successful because of the positive feedback from everyone involved. “I thought it would be fun to be outside because I like nature and it’s relaxing. My favorite activity is hitbodedut (mindfulness/meditation),” said student Na’ama Klein. Perhaps more importantly, the students eagerly look forward to it and have begun generating their own questions and ideas about ways to utilize our time spent outdoors. As we move forward, we hope to extend this idea of outdoor education to other grades in our school.