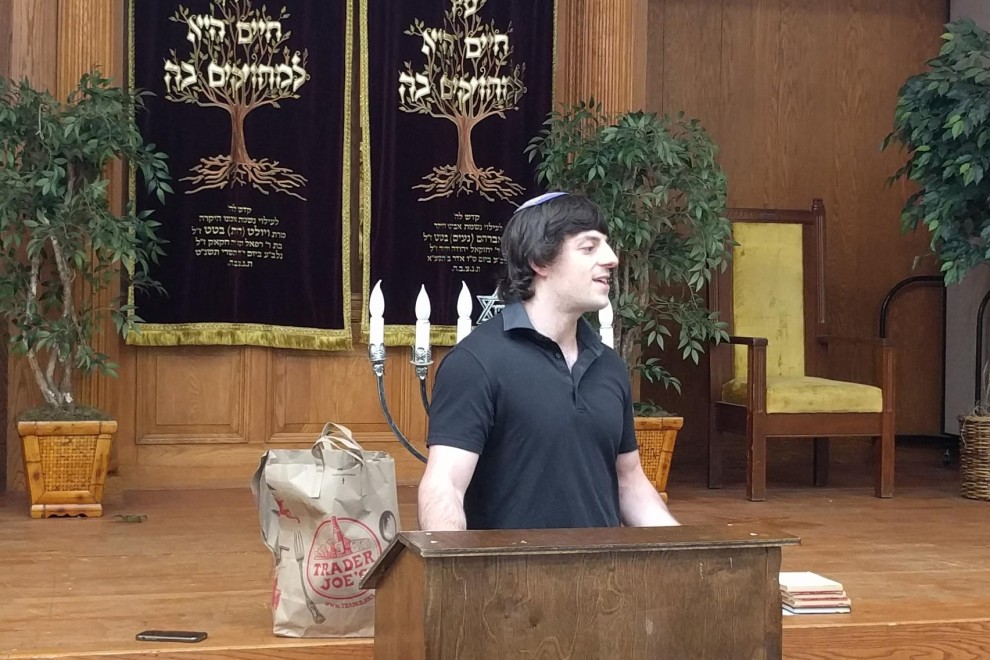 Adam (AJ) Edelman, the first Orthodox Jew to compete in the Winter Olympics, came to

visit Southern Connecticut Hebrew Academy on Friday, September 27. Edelman, who represented Israel at the 2018 Winter Olympics in Pyeongchang, met with fascinated students while answering questions about his life as an athlete and Orthodox Jew - two lifestyles that require intense devotion, strength, and commitment.

At first glance, one wouldn’t guess that this modest 28 year old represented Israel last year in one of the most extreme and dangerous sports at the Olympics. Edelman’s chosen sport, known as “skeleton,” requires athletes to ride a small sled down a frozen track while lying face-down and head first, and without padding and a thin uniform in order to be as fast as possible. As he began speaking about his journey as a skeleton athlete and the challenges he faced as an Orthodox Jew, his deep inner strength started to shine. When reflecting on how a nice Jewish boy could find himself participating in such a dangerous sport, Adam commented, “I wanted to play basketball as a kid but I couldn’t get the ball into the net, so I thought I would just throw myself on the track instead of spending hours trying to throw the ball into the net.”

It’s not that the path to representing Israel for skeleton was any easier. When he first began, the feedback he received was far from encouraging. The Lake Placid Drivers School, in its report to the Israel Federation, stated that “he [Edelman] will never be a true competitor. He cannot run. He is not equipped for this sport. He may achieve a small level of success but he will never be truly competitive”. While such feedback may have stopped many people in their tracks, it proved to be a powerful motivator for Edelman. This evaluation gave him a strong desire to continue to perfect his sport. He worked obsessively on his physical and mental conditioning, admitting that “sport becomes your job; everything I did: sleeping, eating, drinking, was in order to bring Israel to the Olympics.” At the time he couldn’t afford a coach, which is often a crucial element in performing at an Olympic level. Even this hardship did not stop Edelman in his pursuit of his dream. Instead, he watched 10 to 12 hours of video a day for four years in order to strengthen the split second decisions required to be competitive. He didn’t stop at videos, however, insisting to focus on practice as well. While the average competitor will practice with 2-3 runs a day - the max that the human body should be able to endure - Adam endured a painful 7-9 runs. “I just shut down my brain” he explains. The preparation for the Olympics encompassed every element of his life. Waking up everyday to the Olympic theme song for an alarm, setting his phone with a countdown to the big day, and weighing his food was also part of his routine for four years. He eventually managed to raise his speed to 91-92 mph while the average speed is 80-90 mph, and he became an Israeli National Champion in skeleton four different times.

Edelman explained to the SCHA students that what helped him most was that “HaShem was behind him” the whole time. He revealed tips that carried him throughout his long journey, like his strong Emuna (faith), wearing his kippah all the time, having the Shema prayer on his helmet while sliding head-first on the ice, and putting on his tefillin first thing in the morning. He warmly recalled that he could always rely on Jewish communities for a Shabbat meal or even for a place to stay for the night. For this skeleton athlete, the choice to compete was very simple: “Hashem made you for a reason with gifts to fulfill your mission: I knew I was made to be an athlete with my sills and being so stubborn,” he joked. So stubborn that the security teams in Europe asked him many times to take off his external Jewish items during competitions, which he categorically refused, explaining he was “an ambassador” as a Jew. AJ transmitted his hard-earned wisdom to the SCHA students by advising: “You should expect success from yourself,” and to “try even harder when people tell you that you cannot do something because you don’t have the skills.”

And success isn’t yet over for this proud Olympian. After graduating from MIT with a degree in mechanical engineering, he now finds himself sliding head-first into his studies at Yale School of Management. If his past is anything to go by, his run of success won’t be stopping anytime soon.