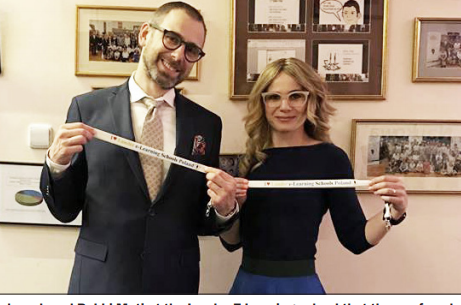 It started with a thank you letter.    Rabbi Mati Pawlak and Hadassah Buchwald-Pawlak had sent a note of appreciation to the Jewish Foundation of Greater New Haven for having received a One Happy Camper grant-- available to all local families with first-time campers attending Jewish overnight camp-- which helped to send their 10-year-old daughter to camp this past summer. What came next revealed the Pawlak family’s personal tale of Jewish endurance, preservation of identity, and finding belonging.

Rabbi Mati and Hadassah were both born in Poland with little to no knowledge of their Jewish background. Rabbi Mati grew up with the basic awareness that he was Jewish, yet he had no association with religion until his teen years. “In my family it was not a secret [that we were Jewish]. However, my family was not observant after the War,” he said. “Many people were changing names, assimilating. My family didn’t change their name; that was the Jewish identity.”

Hadassah, meanwhile, was kept completely in the dark about her Jewish identity. With the fall of Communism, Hadassah and her mother moved to Israel where she became integrated into Israeli society by serving in the Israeli Defense Forces and working as an EMT. With her return to her birthplace of Poland, she met her husband, Rabbi Mati, and then became immersed in religious life.

The horrors of the Holocaust wiped Poland of its once flourishing Jewish life, yet Rabbi Mati and Hadassah became leaders in rebirthing and revitalizing Jewish culture and practice in their city. Rabbi Mati and Hadassah served as principals of the Lauder-Morasha School, the Jewish day school in Warsaw, and together they co-founded and managed the Lauder e-Learning Schools, an online school that enables Jewish students from all over Europe to readily access Jewish education.

Living in Warsaw, on the very bones of the Warsaw Ghetto, made Rabbi Mati, Hadassah, and their two daughters confront the reality that was their home. “When I used to kindle my Shabbos candles I would say [a prayer] for the memory of the people- they could be buried under the building.” The echoes of Jewish pain and suffering reverberated from the street with every opening of the family’s front door, but another echo could be heard, too: that of rebuilding after dissemination.

A recently built mikvah, initiated by the Chabad of Poland, now stands in Warsaw, personifying for the Jews of the community that stark juxtaposition of what was, and now, what is; a powerful rebirth. “You see the Ghetto wall, you see the monuments…You see that gray dark death, and suddenly you see that beautiful light; it’s so empowering,” Hadassah said. “Honestly, it’s beautiful.”

This respark of Jewish life in Poland has also been made possible by the American Jewish Joint Distribution Committee (JDC), an overseas partner of the Jewish Federations of North America (JFNA). JDC services the Polish Jewish community by funding their local institutions and organizing educational and cultural programs. Donations made to the Jewish Federation of Greater New Haven are partially allocated to JDC in support of their mission to restrengthen Polish Jewry.

While Jewish and non-Jewish tourists to Poland alike may not understand why Jewish people voluntarily choose to live in a place of such death and destruction to their people, Hadassah believes that it is imperative to try and understand. Hadassah insisted that asking “Why are you still here?” may come across as insensitive, but “approach[ing] the subject of ‘what does your Jewish life look like in Poland?’ ” can instead open up a beautiful space of dialogue and respect. Inquire, Hadassah suggested, “What does it take to be a Jew in a Polish community? What are the challenges, what are the sacrifices?”

The question of identity remains an integral part of the Pawlaks’ internal family structure. Rabbi Mati instills a Polish identity within the lives of their daughters while Hadassah instills the Israeli. “What will my daughters’ identity be in terms of which side do they connect to more?” Hadassah wondered. “I’m fascinated to see that.” What remains equally as important, however, especially as they continue to integrate into their American life, is the topic of belonging.

At the forefront of the Pawlaks’ minds in their decision to remain in the Jewish American way of life following a one-year position as the OU-JLIC couple at Yale, is their children, Doreen (13-years-old) and Yarden (the aforementioned 10-year-old camper). Having few Sabbath-observant or even Jewish friends their own age back in Poland put Doreen and Yarden into what Hadassah described as “social isolation.” All that has changed with the girls’ integration into their New Haven Jewish social circle as students at Southern Connecticut Hebrew Academy (SCHA), as Rabbi Mati explained, “Here they have a lot of friends and they enjoy it very much.”

Today, the Pawlak family reside in the Beaver Hill neighborhood of New Haven. Rabbi Mati commutes into New York City where he serves as a Prins Fellow at the Museum of Jewish Heritage, and Hadassah is a teacher at Beit Chana Academy High School for Girls and the development manager at SCHA. Suburbia may not be as bustling as city-life in Warsaw--or as powerful a reminder of the continuity of Jewish life-- but for the Pawlaks, it is now their home; and they wouldn’t have it any other way. “For us it’s not the geographical space as much as the community, the people,” Hadassah said. “We found that New Haven has an incredible community.”

If your child will be a first-time camper at a Jewish overnight camp during Summer 2020, visit jewishnewhaven.org/scholarships/one-happy-camper to apply for an incentive grant or financial assistance.