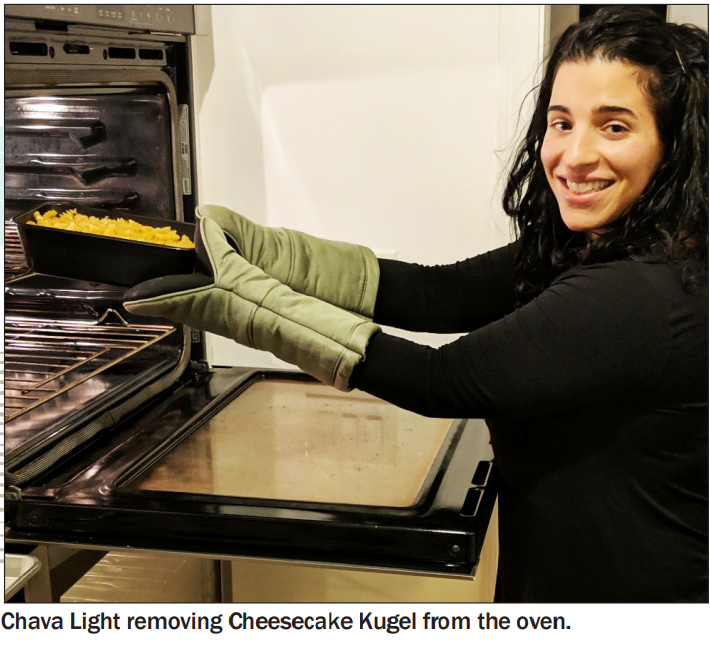 It’s not every day a legend is borne, and certainly not what my Aunty Bonnie expected when she began her first job in a small town in the Midwest shortly after college. No one can say for sure how it started. Some insist a gust of wind blew a stray piece of paper with a recipe scrawled in wispy handwriting right into her path, and some will swear that a mysterious stranger with a long staff and a flowing white beard appeared to her in a dream and gave her the recipe. We will likely never know for sure. However, what we do know is that day Aunty Bonnie’s Legendary Cheesecake Kugel entered our world, and our lives would never be the same.

Was it a cake? Or was it a kugel? Aunty Bonnie had to know. By the time evening arrived, the smells filling her one-room apartment were not of this world.

Everyone who tried the kugel had something to say. “This is a dish that turns heads,” said my Aunt Molly. “This is a kugel that separates the strong kugels from the weak kugels,” said my father. “If there was a dish that could make peace in the Middle East, this would be it,” declared Uncle Abraham. (Uncle Refael disagreed until he tried it. “I stand corrected,” he admitted.) “I’m unsure of exactly what this is,” said my cousin Gloria, “but I’m a fan.” “This is a kugel that derails any hope of me ever going low-carb,” sighed my Uncle Wayne as he reached for a third helping. Some people don’t believe legends until they have experienced them, and I am no exception. As a teenager, although I had the kugel at least once a year on Shavuot as per family custom, I was dubious as to the reputed Powers Of The Kugel. This matter was put to rest in 2001 when my family decided to take a trip together. It was shortly after Shavuot and we (surprisingly) had an extra pan of Aunty Bonnie’s Legendary Cheesecake Kugel which made its way onto the plane as our on-flight snack.

My mother handed a slice to my father; to me; to my brother Yitz; and to my sisters Naomi, Shevy, Riffy, and Shoshi. As she was about to take a piece for herself, a flight attendant tapped her on the shoulder. “Can I try that?”

The Power Of The Kugel took over the flight. Never mind that it was leftovers, its powers had not diminished. In a few minutes every flight attendant on that airplane had a piece. Even passengers took part until every ounce of Aunty Bonnie’s Legendary Cheesecake Kugel was gone. Email addresses were exchanged, and when we returned back to Connecticut, my mother sent the recipe out to the new crop of the Keepers Of The Kugel. “It’s out of our hands now,” she told us. “Aunty Bonnie’s Legendary Cheesecake Kugel has grown its wings.”

It’s been eighteen years since that day, and my mother has made the kugel every year. Almost ten years into my own marriage, I’m finally trying to bake it on my own (and stop mooching off my mother now that I’m in my mid-thirties). Only time will tell if my kugel has the same legendary power, but I’ll make some extra just in case someone happens to be walking by and is overcome by the scent of heaven and stops in to have a slice.

3. Crush Rice Krispies, sugar and cinnamon together, and pour half of it into the pan.

4. Beat eggs and sugar together in a bowl.

8. Pour into pan, and sprinkle with remaining topping.

10. Refrigerate and eat again on later occasions if by some miracle it was not finished the first time it was served.