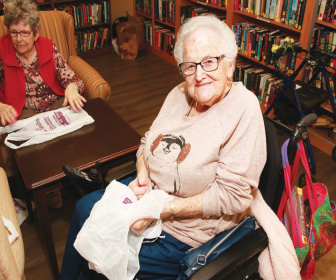 There are those who wring their hands over the amount of plastic finding its way into landfills and oceans, and there are others who use their hands as part of the solution. In the act of “plarning.” A fusion of plastic and yarn,“plarn” refers to the strips cut from single-use plastic shopping bags that can then be crocheted into items such as baskets and even backpacks. The Towers Life Enrichment Coordinator Susan Skalka learned about plarning several years ago, but the idea of using plarn for bedding for homeless families came last year when she toured the Bethel AME Church in New Haven. Administrators there hoped to set up a warming center for homeless families. The Towers received a grant for supplies from the Jewish Foundation of Greater New Haven’s Women of Vision Society. A Towers aide, who is an ace crocheter, taught Skalka, residents, and volunteers how to cut and crochet the plastic strips. Skalka brought the project out into the community, engaging the Sisterhoods of Congregation Or Shalom and Temple Beth Sholom and the Cheshire chapter of Hadassah. She asked BBYO Connecticut Valley Region members to bring bags to its statewide winter convention; the effort netted more than 10,000 bags. On March 18, the Jewish Federation of Greater New Haven held a community-wide Mitzvah Day at the newly-reopened JCC of Greater New Haven and at several area venues, including The Towers, which became Plarning Central. Residents and volunteers prepared and cut bags and crocheted the strips. Many left armed with bags to cut or strips to crochet at home.

Towers resident Esther Brochin found her fingers weren’t strong enough to work with the plastic so she helped cut the bags into strips. Fellow resident Eva Cooper straightened the bags for cutting.

Each sleeping mat, which measures around 3’ x 6,’ requires 500 to 600 bags and about a month to complete. Skalka estimates that 2,000 to 3,000 people are working on the project. “It’s absolutely addicting!” said Hyla Chasnoff, a Hamden resident who volunteers at The Towers as a member of Temple Beth Sholom and is crocheting her sixth sleeping mat. Fellow Hamden residents and Beth Sholom members Amy and Dan Sparks began volunteering regularly at The Towers over the winter with their children -- Garrett, 12, and Maya, 10. Skalka taught Amy how to plarn and two months later, she is close to completing her first mat. On Mitzvah Day, the whole family worked at the various plarning stations.

In addition to launching resident and community plarning groups, The Towers’ project has inspired participants as far away as Georgia and California, adult children of Towers residents, to join the effort. So far, 18 mats have been created, with more in the works. In the end, Bethel AME Church did not receive funding to set up a warming center, but Skalka is working with the New Haven Police Department to see if they will distribute the mats to the city’s homeless. Skalka hopes to continue growing the project throughout the area. “I consider it a win-winwin project,” she says. “We’re helping the planet, we’re helping the homeless, and we’re building community.”