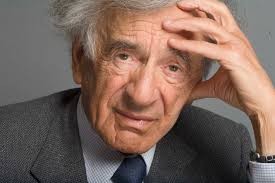 Today, we mourn the death of author, Nobel laureate and treasured friend Elie Wiesel, z"l. His story and accomplishments are well known—a boy from a small town in Romania who survived one of the most horrific events in human history and went on to become a writer, activist and standard-bearer for the meaning of humanity.

Elie Wiesel spent time in the company of presidents and world leaders. Federations are honored he also spent so many years with us.

He stood with us in Washington, D.C. on the National Mall when we campaigned for the freedom of Soviet Jews. His presence transformed every Federation event he spoke at over the decades and across North America, where he reminded us what it means to be a community.

Said Richard Sandler, chair of the Board of Trustees of The Jewish Federations of North America, “It was only a few years ago that Elie Wiesel graced the stage of Federations' seminal event, the General Assembly, with another great humanitarian, Natan Sharansky. I was honored to have met with Elie, as we were all moved by his inspiring remarks and his life's wisdom. We will never forget that moment, nor him."

The world—and our community—has lost one of its heroes, an inimitable man who confronted the darkest chapter of human history and used that experience to show the world the light of our shared humanity. He is and will forever be a blessing.