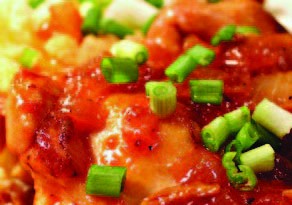 Recipe contributed by Tower One/Tower East’s At the Heart of It All, the longest kosher-dining facility in Connecticut. Operating under the full-time supervision of a mashgiach, the kitchen serves 200 dinners every night, as well as Shabbat dinners, Kiddush, and special holiday meals. Guests are welcome for a nominal fee.

1. Place sun-dried tomatoes in cup of hot water and set aside for at least 15 minutes to soften.

2. Pound chicken breast halves one at a time to about a ¼ inch thickness, try not to tear them.

3. Heat margarine in large sauté pan over medium-high heat. Season the pounded breast with salt/pepper, dredge them in potato starch, and shake off excess. Place the chicken breast into the pan and cook until golden brown on both sides, about 5 minutes. Transfer the cutlets to a baking dish, large enough to hold them in one layer. In small sauce pan, combine the wine and marmalade, stir in the peaches and place over medium-high heat, allow the mixture to boil until the fragrance of alcohol is gone, 2 to 3 minutes.

5. Remove the sun-dried tomatoes from water and cut into thin strips. Spoon tomatoes over chicken, place in oven for 5 to 10 minutes. Transfer chicken cutlets to serving plates, spoon sauce over it and garnish with scallions.