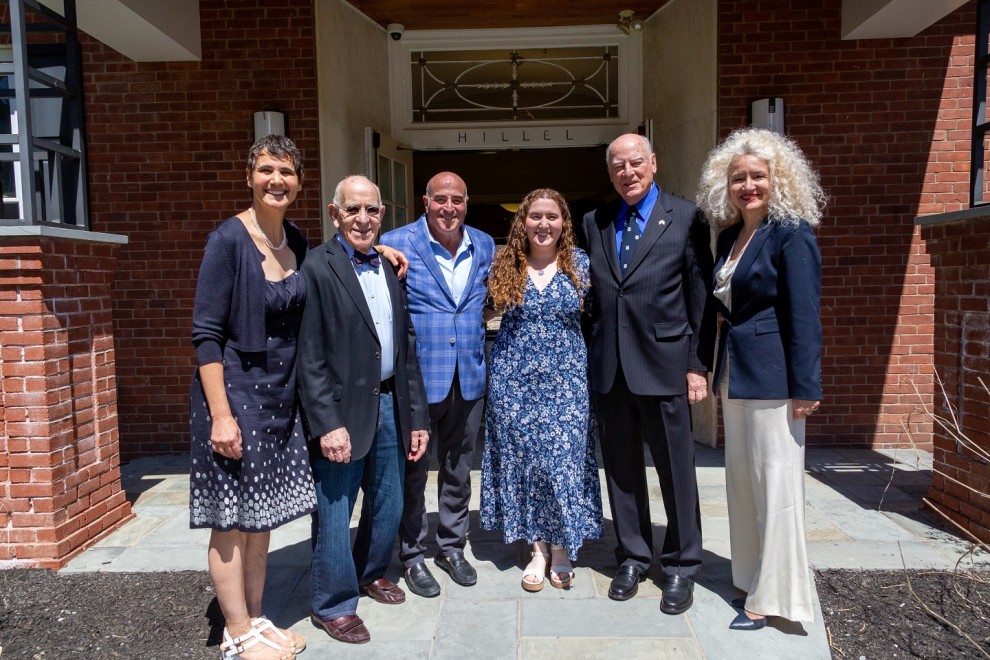 On Sunday, May 1, 100 guests joined the UConn Hillel for a celebration of the 10th anniversary of the campus Trachten-Zachs Hillel House, honoring two UConn alumni, Lawrence “Larry” Handler (‘67), and Dori Jacobs (‘22), for their outstanding contributions to UConn Hillel.

A cum laude UConn graduate, Larry Handler was the recipient of the Senior Accounting Award, Business Law Award and was inducted into Beta Gamma Sigma business honor society. He subsequently received an MBA from New York University where, as a research assistant, he won the Outstanding Faculty Member award. Handler, whose career has encompassed both public and private industry, also served as an adjunct faculty member at the University of Connecticut. He was inducted into the UConn School of Business Hall of Fame and selected as the Accountant of the Year by the university's Accounting Department. He has served on six national and local boards of directors, including the National Council of the American Institute of CPAs.

Dori Jacobs, who graduated UConn in May with a major in psychology and minors in mathematics and statistics, arrived in Storrs from her hometown of Santa Clarita, CA and immediately became dedicated to the Hillel community, eventually serving one term as treasurer and two terms as president of the Hillel student boar, leading her to also serve as Hillel’s first ex-officio senator to the Undergraduate Student Government. As a student leader, Jacobs led the student board in outreach and in creating successful programs; facilitated relationships with UConn administration, other Jewish organizations, and the campus at large; and worked hard to fight antisemitism on campus.

The celebration also included a keynote address delivered by UConn's interim president, Dr. Radenka Maric, who shared her vision for a thriving Jewish life on campus; and remarks by UConn Hillel Executive Director Edina Oestreicher, Executive Director, who shared how UConn Hillel inspires Jewish students to connect to one another, to explore Judaism and to hone their leadership skills -- all of which ensure a strong Jewish future. The speakers also noted that, despite the challenges of the past two years brought about by the pandemic, UConn Hillel continues to enrich the lives of students and empower them to become leaders in their local communities and beyond.

The program concluded with a student-produced video that highlighted Hillel’s growth.

The 10th anniversary celebration was chaired by Henry M. Zachs and David Trachten. The generosity of Trachten’s father, Morris Trachten z"l, and Henry Zachs made possible the renovation of the UConn Hillel building in 2010.