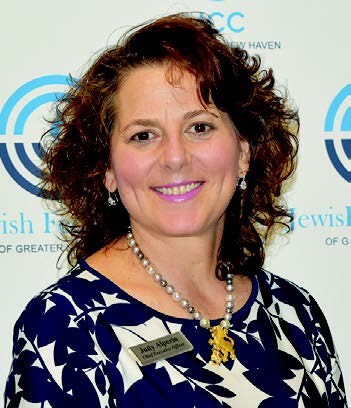 From the Desk of Judy Alperin
​CEO, Jewish Federation of Greater New Haven

The Jewish people have been on a spiritual journey these past few weeks — and especially these past few days as we have entered into the 9 days of mourning before Tisha B’Av, which begins at sundown this Saturday night and concludes at sundown this Sunday.  Tisha B’Av marks the day of repeated tragedy as we recall the destruction of the First and Second Temples in Jerusalem, marking the Jewish people’s expulsion from Jerusalem as well as the expulsion of Jews from other communities in the Diaspora.  This is a time for introspection and for understanding the rabbis’ teaching of sinat chinam, that baseless hatred and the resulting bad behavior is what leads to destruction and downfall.

Adding to our struggle during this period is current news emanating from our historic homeland, Israel.  The Knesset passed the Basic Law:  Israel as the Nation-State of the Jewish People.  Over the past ten years, this legislation has been proposed and shelved several times as it raises many questions and concerns.  Jerry Silverman, CEO of Jewish Federations of North America has been in Israel lobbying hard on behalf of North American Jews and Jews of the Diaspora to affect changes to the bill before it reached its final form.  While he was successful in part, there are still several troubling sections.

Several of these issues warrant discussion in our community.  The Jewish Federation movement and our Jewish Federation is committed to pluralism.  We believe that pluralism is sacrosanct; that each stream of Jewish expression is valued and should have the opportunity to be celebrated, including in Israel.

As Israel has struggled with what it means to be Jewish and democratic, a parallel struggle regarding the authority over religion and religious expression has been ongoing.  The ultra-orthodox rabbinate affirms its authority and this has led to difficulties at the Western Wall with regard to religious practice and the spaces to pray.  Yesterday, for the first time, (https://www.timesofisrael.com/attorney-general-halts-questioning-of-rabbi-over-unsanctioned-wedding-ceremonies/) a conservative rabbi, Rabbi Haiyun, was brought in for questioning over his officiating at non-sanctioned weddings in Israel.  The rabbi was rousted from his bed at 5:30 a.m. and brought to the police station as a result of the accusation by the rabbinical court that the rabbi was performing unsanctioned weddings.  As stated in The Times of Israel, “Israel’s rabbinate oversees all personal status issues for Jews, including marriage and divorce, and does not recognize civil unions conducted in the country, or ceremonies performed by non-Orthodox officiators. Though performing such ceremonies is illegal and carries a prison sentence, the ban on the practice is not enforced by police. In recent years, some Orthodox rabbis have also stepped up private ceremonies outside the rabbinate.”  The Attorney General has subsequently halted the questioning.

Rabbi Haiyun had been invited to speak at the Israeli President’s residence on Thursday, July 19, 2018, prior to his questioning to give a lecture in honor of the Tisha B’Av fast.  He may use that platform to assert marriage freedom in Israel and the ability for non-Orthodox rabbis to officiate.  Perhaps he will discuss sinat chinam and how baseless hatred can lead to the downfall of the Jewish people.

What follows is a summary of the Nation-State legislation as well as an opportunity to participate on a conference call sponsored by our partners at the Inter-Agency Task Force on Israeli Arab Issues as several of the sections of this bill create great anxiety within the Israeli Arab community.  Please join the call if you are hearing more about this issue from the Israeli Arab perspective.

The new law enshrines in legislation Israel’s status as the nation state of the Jewish people. The first clause lays down ‘basic principles’ about Israel as a Jewish homeland. The law also contains several other short clauses about: state emblems, the nation’s capital (already enshrined in Basic Law: Jerusalem), “preservation of heritage,” ingathering of exiles, relationship with the Diaspora, language, official calendar, national holidays and days of rest. The last clause requires that an ‘absolute majority’ of MKs approve later changes to the bill, which is common with regard to basic laws.

Please also mark your calendars:  Temple Emanuel will hold its annual scholar-in-residence program featuring Rabbi Uri Regev (the lawyer and head of Hiddush for Religious Freedom and Equality) March 7-10, 2019, giving us a chance to speak about issues confronting Israeli society.  This program could not be more timely.

Israel’s recently enacted Nation-State Law continues to make waves throughout the country and abroad. Multiple protests have been staged by groups demanding its revocation or amendment and the focus of the broader public debate has now shifted primarily to what is absent from the law - namely a clear reference to equality of all citizens, regardless of race, ethnicity or religion. Below is a short update about reactions and responses to the Nation-State law since its passage. For a general background about the law and its specific provisions, see the attached background document.

Local Reactions to the Nation-State Law

Basic Law: Israel as the Nation State of the Jewish People (the “Nation-State Law”) is a largely declarative constitutional law that reaffirms Israel’s status as the national homeland of the Jewish people. While some of Israel’s detractors are uncomfortable with the concept of a Jewish state, most local criticism has concerned itself with the law’s perceived failure to balance between the country’s character as both a Jewish State and a democracy. Unlike Israel’s Declaration of Independence which refers to “complete equality of social and political rights to all its inhabitants irrespective of religion, race or sex”, similar language is absent from the Nation-State law.

The law did not revoke any rights or privileges of any group, but critics are concerned its passage reflects the growing influence of right-wing nationalism in Israel and that it could be used to support policies that fail to respect the equal rights of minority groups going forward. This was the primary reason that many minority groups and those on the political left opposed the law prior to its passage, calling either for major amendments or for the adoption of language from Israel’s Declaration of Independence in its stead. In response, the Prime Minister has argued that the full civil rights of all the country’s citizens have been enshrined in other Knesset laws and that determining the country’s flag, national anthem and language in no way diminishes the individual rights of any Israeli citizen.

Since becoming law on July 19th, the following minority groups have been protesting the law’s passage on the grounds that it impinges on their social rights:

Although less vocal during the Knesset deliberations on the bill, the Druze community has been highly outspoken in its criticism since the law’s passage. Druze leaders have claimed the law casts the Druze community as second-class citizens. Three Druze MKs filed a petition in the High Court challenging the law’s legality. Several Druze soldiers have threatened to quit the IDF and called for others to do so. Last Saturday night (August 4th) demonstrations were held around the country including a mass protest in Tel Aviv’s Rabin Square.

At the request of opposition MKs, the Knesset plans to convene a special session on Wednesday August 8th during its summer recess to discuss the Jewish Nation-State Law and “its negative impacts on the values of equality and democracy.” Planned speakers include new opposition leader Tzipi Livni (Zionist Union), Druze Zionist Union MK Salah Saad and several Arab MKs from the Joint List.

JFNA Response to the Nation-State Law

The Jewish Federations of North America is deeply committed to a strong democracy in Israel which embraces pluralism, diversity, and equal rights for all citizens - fundamental values of the Federation system. These values find expression in JFNA’s annual Israel Public Policy Priorities which include: (i) Speaking Out for Minority Rights, (ii) Opposing the Delegitimization of Israel and (iii) Promoting Religious Pluralism and Equality of Religious Expression.

While the Nation-State bill was under consideration, we expressed our concerns about the alienating effects such legislation could have on key minorities in the country and on Diaspora Jewry. In coordination with the Jewish Agency for Israel and the Conservative and Reform movements, we convened a host of meetings with Knesset members, the Prime Minister’s office and other government officials to voice these concerns and urge changes to the bill.

Although some of its most problematic clauses were stricken, we were disappointed by the passage of this law and have continued to convey that message both in private meetings and through the media. The Jewish Federations of North America is proud of Israel’s democracy and we continue to hope our concerns about this divisive law will be addressed in the upcoming Knesset session. 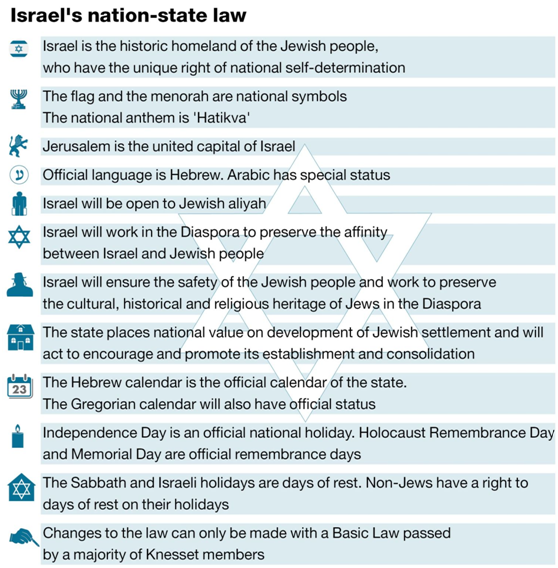