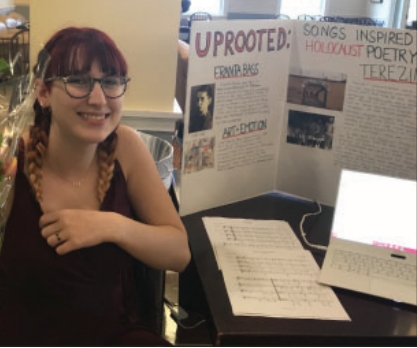 Hopkins School graduate
For her senior project at Hopkins School, Sophia Colodner composed two songs to the lyrics of two poems by Franta Bass, a child imprisoned in Terezin Concentration Camp. The project was mentored by Ms. Schroth and Mr. Melchinger.
Terezin Concentration Camp, located in the Czech Republic, was active from 1940 until the end of the Holocaust. Over 30,000 of Terezin’s inhabitants died due to labor, starvation, neglect and disease. Of the 15,000 children who passed through Terezin, less than 100 survived. I decided to focus on Terezin for my project due to the large volume of children who were there for extended periods of time.
Franta Bass, a young Jewish boy from Czechoslovakia, wrote poems in his diary during his time in Terezin. He was born in Brno, Czechoslovakia, in 1930 and was deported to Terezin in 1941. Bass wrote a number of poems about his experiences as a child in Terezin, two of which, “Home” and “The Old House”, were used as lyrics for my musical compositions.
To write contemporary musical compositions influenced by the words of child poets in Terezin, I did extensive research on Holocaust poetry and Jewish music composition. It was important for me to convey the emotions expressed by these children’s words. By using dissonant melodies and minor chords, while also retaining the simplicity, my goal was to convey the nostalgia that Franta Bass felt for his happier past. I chose to compose music set for a treble choir.
Like Franta Bass, many victims used art as a way to express their emotions. Judaism has a rich musical tradition spanning thousands of years and many genres. For my compositions, I tried to emanate the emotions that victims of the Holocaust felt, in order to continue its remembrance.
As with many concentration camps, a sign on the front of the gate at Terezin read, “arbeit macht frei,” or, “work will set you free.” This was a lie. In 1944, Bass was transferred to Auschwitz, where he was murdered.
To listen to Sophia’s compositions, visit jewishnewhaven.org/uprooted