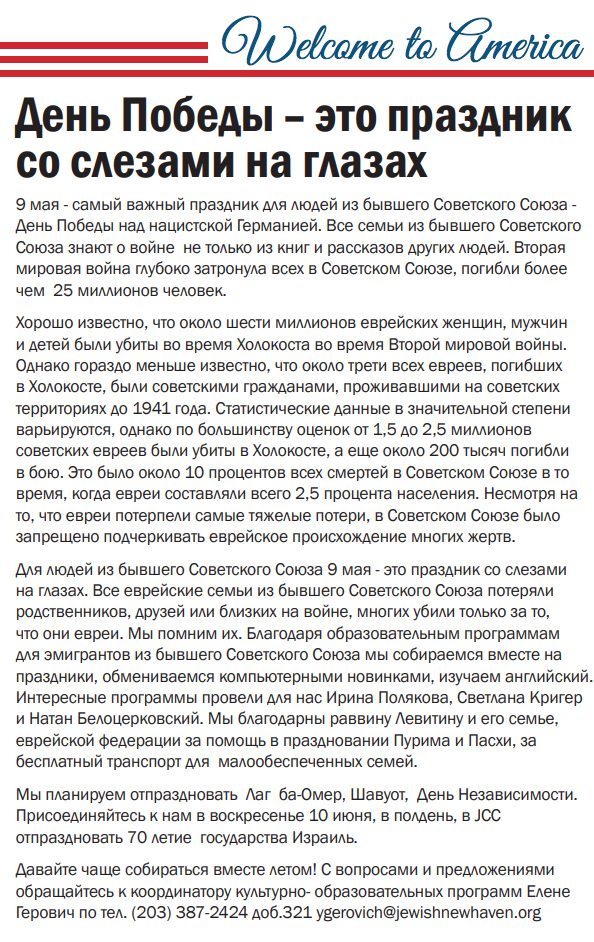 It is well known that approximately 6 million Jewish women, men, and children were killed in the Holocaust during WWII. However, it is somewhat less known that about one-third of all Jews who died in the Holocaust were Soviet citizens living in the Soviet territories before 1941. The statistics vary to a great extent, however, according to most estimates between 1.5 million and 2.5 million of Soviet Jews were murdered in the Holocaust and about 200,000 more died in combat. It was about 10 percent of all Soviet deaths at a time when Jews were only 2.5 percent of the population. Even though Jews suffered the heaviest losses, it was discouraged to emphasize the Jewish origin of many victims. For people from the former Soviet Union, May 9 is a touching and sad holiday that brings tears to the eyes of many. All Jewish families from the former Soviet Union lost relatives, friends or loved ones in the war, many killed just for being Jews. We should remember them even as we celebrate the holiday.

In March and April, the New American Acculturation Program offered lectures on 2018 tax updates as well as scholarships for first-time campers. Irina Polyakova, Svetlana Kriger and Nathan Belotserkovsky also led programs on American and Jewish history. Family and friends gathered for area Purim and Passover celebrations, which helped them learn more about Jewish traditions and strengthen their Jewish identity. Thanks to Rabbi Levitin and his family for providing free services, and to the Jewish Federation of Greater New Haven for providing free transportation for low-income families. The New American Acculturation Program is planning Lag B’Omer, Shavuot, and Independence Day celebrations as well as more educational programs and lectures. Join us on Sunday, June 10, at noon at the JCC Auditorium to celebrate Israel’s 70th Birthday.

For more information about the New American Acculturation Program, including sponsorships of specific programs, contact Yelena Gerovich at (203) 387-2424 x321, or ygerovich@jewishnewhaven.org.