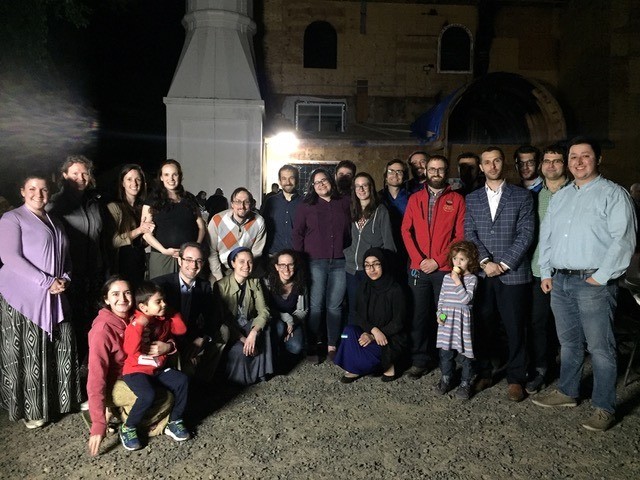 On Monday, June 3, members of the Jewish Federation's young adult community, organized by community member Josh Weinstein, joined with the Yale Divinity School's Interfaith Club for a solidarity visit to the Diyanet Mosque of New Haven, followed by joint prayer services and a shared Iftar meal to celebrate the final night of Ramadan and to stand together against hatred and intolerance.

In March, the Diyanet Mosque of New Haven was the victim of an arson attack, investigations into which are still under way. The 20 attendees of the multifaith event were given a tour of the fire-damaged mosque, which also serves as a community center and religious school, by Imam Mikail Keskin and his wife and informed by them of plans to restore and reopen the mosque.

After the tour, the two communities shared prayers in the congregation's temporary modular buildings, followed by a kosher/halal meal together under the stars where the members of the two faith groups had the opportunity to chat over delicious food, learn about one another's experiences within their personal levels of comfort, and forged bonds of solidarity between the communities. As one member of the Diyanet congregation remarked, he was touched by the fact that "you showed up when others have forgotten, when we are no longer a central news story."

At the end of the night, Imam Keskin expressed a desire to continue partnering on activities across faith lines, including but not limited to the mosque's reopening — "inshallah," he added. In today's fraught political climate, it is more important than ever that we stand together against hatred and bigotry. In the words of organizer Josh Weinstein, "May we all be strengthened and comforted in our times of need and come together and share in good times yet to come."