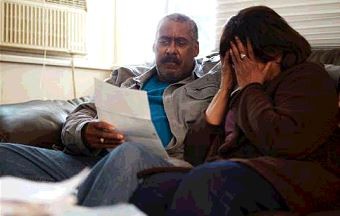 THE ELLISONS are a young family (parents Al and Kathy are both 34, Kyle is 9 and Gaby 6) who were in crisis when they went to the JFS Food Pantry in June of 2015, telling a JFS social worker that they were out of food and out of options as they were evicted from their apartment a month earlier and were given until the end of the current week to vacate the family home of Kathy’s sister and brother-in-law, who had promised them only a short-term stay. Al lost his plumbing job in October of 2014 and remained out of work for seven months. Although he was now working 30 hours per week as a landscaper at the time of his arrival at JFS and Kathy had received extra hours during the last few months in her part-time job as a CNA, they had not yet found an apartment that they felt they could afford. They had accumulated a great deal of debt over the preceding months and were unable to pay many of their bills,including their outstanding utilities, their car payments, and credit cards. After providing them with a 30 lbs. package of emergency food, the JFS social worker met with Al and Kathy to map out a plan to prevent the family from becoming homeless. JFS Emergency funds were used to stabilize their short term living arrangements until a longer-term housing solution could be implemented. The social worker was able to convince the relatives to allow them to stay an extra week in their house, and JFS promised to provide them with an additional week in a New Haven motel with the help of agency emergency funds. This plan bought JFS the time that was needed to establish a longer-term sustainable plan, including finding them an affordable two bedroom apartment in a safe neighborhood. Simultaneously, an aggressive, proactive case management approach helped them to procure SNAP/Food Stamp benefits, financial assistance through Operation Fuel, and some moderate help with their car expenses, school expenses, and other basic needs. The Ellisons recently moved into a new apartment, where they have been able to stay current with the $850/month rent payments every month to date. They continue to come to the JFS Food Pantry for supplemental food once per month, and the children have been receiving counseling at JFS on a weekly basis. Al and Kathy continue to work with their case manager to make sure that they are following their financial plan and utilizing of all of the community resources and governmental benefits programs available to them.

The Jewish Federation of Greater New haven is
your philanthropic partner in doing good here, in
Israel, and in 70 countries around the world. Help
renew the hopes and dreams of people who are
struggling to make ends meet. One gift, your gift,
helps feed the hungry, care for the elderly, educate
our youth, support Israel, and ensures a Jewish
future.
Make your 2017 Campaign contribution at www.
jewishnewhaven.org/give or call (203) 387-2424