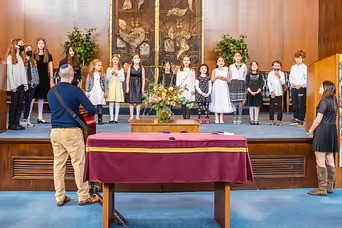 When Rachel Light came up with the idea of having the children of Beth El–Keser Israel [BEKI] sing at the March 2022 installation of Rabbi Eric Woodward, she didn’t realize she was launching what would become the congregation’s new Youth Choir. Rachel recruited Joshua Perry--who, like Rachel is a BEKI member and the leader of tefilah (prayer) at BEKI—to help, and they taught 15 children some songs.

The kids really loved it, and Josh and I did too,” she said. “We got really great feedback from congregants that they loved it too. So it kept going.”

They rehearsed on Sundays after religious school, then performed at a Friday night and Saturday morning service.

When the choir was invited to be the opening act for the Connecticut Z’mirah’s Chanukah concert this winter, Light asked the children if they were interested. “They were jumping up and down,” she said, telling her, “Yes, of course we want to do it!”

Since rehearsals are just 40 minutes long, Perry records each song for the children to practice at home. “Parents tell me that they’re singing the songs together in the car,” Light said. “Although we are exposing them to new tunes, they are learning key parts of the service. These are important songs for the children to learn in their Jewish practice.”

“It’s so fun to work with the kids, because THEY think it’s fun,” Perry said. “I think of the choir as part of building a joyful, fun synagogue community where children and young people want to be. We need to keep being creative about ways to engage everyone.”

“When we rehearse, we are not focused on perfection,” Light explained. “We’re just singing. If we can add some nice harmonies that aren’t complicated, we do that.” Currently, the choir is made up of 12 students. There are no auditions and children can join at any point.

“When they perform, they are very proud, eager, and excited,” Light noted.

“I like the BEKI choir because I have my friends in it, there are cool songs, and I like to perform. A lot of people in the BEKI community like it because we are beautiful singers and we sing Jewish songs,” Ramona Freiman Light explained.

Ranging in age from 5 to 13, the children stand interspersed, giving the older members an opportunity to mentor the younger ones. “They are kind to each other,” Light said, with BINA [BEKI’s religious school] kids making friends with Ezra Academy kids.

Miriam Purdy, one of the younger members of the choir, agreed. “It’s very fun and very cool to be in the choir because there are big kids and little kids,” she said.